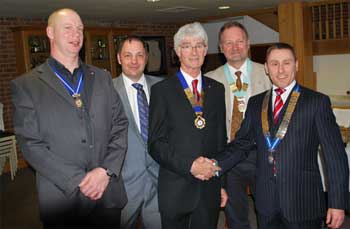 Last Wednesday, Simon Edge (far right) was unanimously elected as the hon. Chairman of Caterham Round Table. Simon, seen here with Vice Chairman Rupert Greatwood, outgoing Chairman Peter Dommett, 41 Club Chairman Trevor Harris and President Barry Louvel, is well known in Caterham for his active involvement in many other organisations such as  the BNI group where he is a past Chapter Director, Caterham Scouts and the Caterham Festival committee.

Simon, who is of reduced height, has now started on a fitness campaign to improve his 6 pack.  He said ‘Being short allows me to look people in the eye when I am standing up.